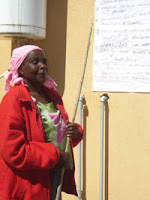 An astounding story of success – and the potential of CLTS – came courtesy of Peter Harvey, chief, water and environmental sanitation, Unicef in Zambia. Photo: A Natural Leader from Ndeke B, Zambia, explains the village CLTS action plan / Petra Bongartz

Mr Harvey said he was initially very sceptical about CLTS, but results over the past year in Zambia have completely changed his mind. Since April 2008 – so less than a year – 517 of 812 villages have been ‘triggered’ by CLTS (see the CLTS website to find out more about this triggering approach) with 402 villages becoming Open Defectation Free (ODF). For some villages coverage – access to latrines – has gone from 0% to 100% within a month and overall coverage has risen from 38% to 93%. A toal of 90,000 have gained access to sanitation.

Maybe the most impressive figure of all is the total cost – US$14 per household, or US$2.3 per capita. And this figure is likely to fall as CLTS triggering takes place, said Mr Harvey, as the training has already been done.

You can read more about ending open defectation, including a piece by Mr Harvey in an id21 special report on sanitation. And the country reports from Zambia – and many other countries – will be available imminently on the new CLTS site.