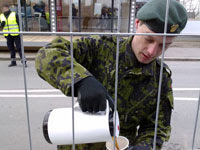 Arriving into Copenhagen earlier this week by plane felt like a poor way to begin my time at the United Nations Climate Change Conference. Unfortunately it was the cheapest way to travel to Copenhagen, and this is another example of why anthropogenic climate change has increased so dramatically and rapidly. I have unfortunately become a part of the problem, and both myself and the conference need to make meaningful changes if climate change is to be mitigated. Photo: Danish soldier at COP15 /Shoumojit Kanjilal

It felt ominous to be arriving in Copenhagen just after the talks had almost collapsed after the African Group and G77 China block of developing countries stalled talks owing to accusations that the Danish hosts were trying to sideline negotiations on the Kyoto Protocol. However, with the talks underway, hopes remain high despite the many doubts.

My first port of call was the vast Bella centre, where the main conference was being held. The atmosphere outside the centre resembled that of a music concert as I was suddenly being handed leaflets, bags of goodies and even free vegan sandwiches. It certainly didn’t feel like an event that would be historic, and even in the queue for the Bella centre, the carnival atmosphere prevailed with the police were handing people free coffee and tea, and UNFCCC workers handing out free soup. There was even a complete absence of protesters, and another hypocrisy seemed to be stirring.

After failing to obtain entry to the Bella Centre owing to overcrowding, I then headed though the snowy streets to an alternative to the main conference – Klimaforum 09 (Peoples’ Climate Summit. This conference has something of an activist feel, packed full of people of all ages and nationalities, with messages of the devastating impact of climate change such as that predicted for the Maldives.

The most thought provoking talk of the day was that of George Monbiot, a journalist and climate activist, on the curse of fossil fuels. Monbiot made a compelling argument on why there would be no meaningful policies made at COP15 as discussions and agreements will be made in one direction only – on curtailing demand for non-renewable energy. However, at the same time, there is little or no discussion on the curtailment of non-renewable supplies with sources not likely to diminish with improved technology to access previously inaccessable supplies, such as coal under the north sea. Monbiot’s central conclusion is that non-renewable sources need to be left in the ground, and renewable alternatives need to be used immediately. Perhaps meaningful agreement will not be made after all. However, until the conference is over, I have to retain my hopes.