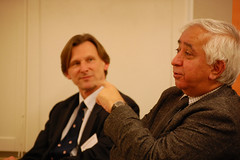 “Do we have a choice?” was the provocative question posed by one speaker at a New Manifesto round table hosted in The Hague by the 3TU.Centre on Ethics and Technology. This question came as a response to the STEPS Centre’s emphasis on ‘directions’ of sustainable development and innovation pathways. Photo: Prabhu Kandachar (r) and Jeroen van den Hoven (l)

We’ve now published videos of the main speaker presentations, the slides on Slideshare, and photos on Flickr. The video ‘vox pops’ from participants will also be posted soon.

The report from the Roundtable is now on our Manifesto site, written by Ilse Oosterlaken from the 3TU.Centre on Ethics and Technology. Ilse, who organised the roundtable, has also written her own blog post on the roundtable.

Professor Luc Soete, Director at UNU-Merit, who began by pointing out that he had worked with many of the authors of the original Manifesto, and had been critical of the Sussex Manifesto when it was written in 1970! He suggested that the influence of the original Manifesto had been far-reaching, and thus argued for the importance of evaluating its impact – I would argue an extremely challenging task for any policy document.

I thought Professor Soete’s main point on the New Manifesto was about the importance of different disciplinary perspectives. He suggested that the New Manifesto must consider the issue of social diffusion of innovations. It needs to incorporate the contributions offered by the range of social sciences in helping to understand why and how different innovations may or may not be developed or adopted. In other words, we must not underestimate the important role of individual human and social behaviours on the development and diffusion of innovation. I agree, and this leads the question of how that might be expressed in policy recommendations.

Professor Soete was followed by Jasper Grosskurth of the Dutch Foresight group (STT) looking at “African Technology Futures” with a strongly free market lens. Jasper critiqued the Manifesto’s point on direction with the question “do we have a choice?” He said the answer was “no”: that change is happening, and that innovations will unfold without our help in orienting them, and that people are better off for it!

This certainly sparked strong debate on ethics, who decides, whose ethics take priority. How can one group (e.g. elites from the global North) decide for others? Linking his argument with the two Ds of “diversity” and “distribution”, Jasper argued that there is a positive feedback loop between technological diversity and access to technology, and thus the more diversity, the more access and vice versa. With further reference to “Distribution”, Jasper said “help the fast, clever ones – rich and poor” with the idea that encouraging the “clever” ones to access technology would have a positive knock-on effect for the continent. There are lots of provocative points here, but this perspective misses out on important issues. It assumes that “trickle down” is enough to distribute the benefits of technologies – and doesn’t suggest how to deal with risks and any negative impacts caused by some technologies.

The third presentation was by Monique Deminint – part of the Universal Access to Female Condom (UAFC) Joint Programme, which looks at R&D for better female condoms to achieve a reduction in HIV infections. Her concrete example brought up the challenges of linking needs to market demands, while also attempting to simultaneously change behavior and create demand, by enabling R&D for a diversity of innovations that meet different social and cultural preferences.

Three more speakers from TU Delft spoke, including Professor Jeroen van den Hoven, scientific director at the 3TU.Centre for Ethics and Technology and working on a grant programme on ‘Responsible Innovation with NWO (the Netherlands Organisation for Scientific Research). Prof van den Hoven talked about ‘Value-Sensitive Design’, which he described in terms of values, norms, and ideals needing “to be embedded in the things we make”.

Professor of design engineering, Prabhu Kandachar (TU Delft) followed by addressing ‘Design for the Base of the Pyramid’, describing concrete links with industry and university students toward ‘human-centred design’ that focuses on design and engineering of technologies that meet human needs. When questioned on the rationale for the location of the BoP labs in Delft instead of in developing countries, Professor Kandachar said that Phase 2 would relocate the design and engineering activities closer to the places where the innovations are intended to be used, aiming to move into building innovative capabilities in those regions. I’m curious to see how those plans manifest. Lastly, David Koepsell (associate professor at 3TU.Ethics) talked about ‘revising intellectual property regimes’.

Roundtable participants came from a range of different backgrounds, disciplines and universities across the Netherlands, including academics from the Technical Universities of Twente and Delft, the Institute for Social Studies, and Wageningen – economists, philosophers, sociologists, and engineers. Also present were some social entrepreneurs, other representatives from the private sector, NGOs, and the Dutch Advisory Council for Science and Technology Policy, as well as students ranging from industrial ecology and microbiology to philosophy – a rough count of about 40 people.

So do we have a choice? My view is that we must make choices and thus the question becomes whether and by what mechanisms diverse groups with different needs, values, and preferences are able to exercise that choice.

One of the challenges is creating spaces for the important task of clarifying one’s individual and societal definitions and visions of sustainability, development, and also innovation. This means generating platforms for discussion and debate to help develop policies that respond to these associated plural understandings, enabling choices that actually respond to real needs and diverse values.