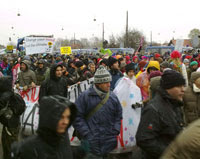 When I woke up early and bleary eyed in Copenhagen on Wednesday the heavy snowfall made global warming seem very far away. With limited access to the Bella Centre and a large demonstration having been planned, “the people’s assembly”, the main transport links to the centre had been closed. Photo: Shoumojit Kanjilal

The Danish friends I was staying with had planned an alternative protest with the main aim of getting past the police and barriers to access the centre. Initially I was very sceptical about the motives and impact of such a protest, and that of illegal access to the centre. However, after discussion with the protesters as to why they felt it was important, I was beginning to become convinced that the climate conference was missing many of the major requirements for there to be meaningful reductions in global emissions. For example, the main agreements that are to be made at the UNFCCC Conference will be over the increased use of biofuels. This will be achieved through land agreements to raise the use of monoculture crops such as oil palm. However, there is scientific evidence that the increased production of such fuel will require significant deforestation, thus negating the benefits. Additionally, many of the NGOs that had been given access to the Bella Centre were now starting to be refused entry, such as Friends of the Earth and many indigenous NGOs from the Americas.

Having decided to join the main demonstration, I journeyed to the Bella Centre after a long walk in freezing conditions, with the wind and snow having firmly set in. Even a couple of miles from the centre, there was a visibly strong police presence, with helicopters circling the crowd. The protest itself was peaceful, with roughly 4,000 people marching with slogans such as “Reclaim Power” and “Climate Justice Now”. People in the crowd were vocally angry with world leaders, and the lack of progress in making a binding agreement. As the crowd neared the centre, many protesters tried to force their way through the barriers and police, and pepper spray was used to disburse the crowd.

The demonstrations raised many questions for me. Firstly, there seems to be intense scepticism over the scientific advice being used to mitigate global warming and the ability of world leaders to make the correct decisions, even in the event of a binding agreement. Additionally, despite all parties being able to participate in the conference, the exclusion of some groups from the Bella Centre raises questions over how much decision makers are willing to allow full participation in the details of the final agreed document. Also, are demonstrations the best way for the public to voice their concerns to both leaders and the global public? And finally, do those who demonstrate represent the views of the global public? Hopefully, world leaders will acknowledge their failings and address them in the final moments of the conference, and the further agreements that will undoubtedly be required in the years to come.