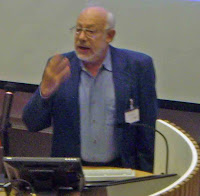 Good morning and welcome back to Sussex for the second day of DSA 2007. We kick off today with what promises to be a very lively debate about biotechnology and the media with a panel that spans journalism, science, academia and big business, Monsanto to be exact. (Photo: Erik Millstone)

Chairing the session is David Dickson, the director of SciDev.Net and freelance journalist Ehsan Masood joins the panel which also includes Erik Millstone, SPRU Professor of science policy and co-convenor of the STEPS Centre’s agriculture and food programme, Rod Harbinson, head of the environment programme at The Panos Institute, and Ranjana Smetacek, director of global biotech acceptance at Monsanto. Debate begins at 09.30 BST.

Dickson welcome address begins with an example of the controversy that can surround biotechnology – the brouhaha over the reporting of Kofi Annan’s “no to GM crops” debate at the Alliance for a Green Revolution in Africa (AGRA) earlier this year The media stories around Annan’s comment, or reported comments fed in to NGOs and back and the debate got red hot and ran and ran.

GM is a media-friendly and NGO-friendly issue that can be turned in to an “apparently black and white issues” says Dickson, but it obscures the real nature of the issues: “It is not black and white and trying to force people in to camps is not helpful. It reduces political dynamics to an issue of scientific safety.” GM is a “lightening rod” debate says Dickson, “And much of the debate is about the power and control of corporations as much as the environmental impact. It is a way of raising the debate, but can also imbalance it,” he adds.

And now for some thoughts from the first panellist Ehsan Masood, who starts controversially with: “If you see a story in a mass market newspaper about GM, don’t believe it.”

The internet has swept away the old daily routine of reporting and the quality of information has suffered as journalists have to file more stories throughout the day for the web, the paper while recording a podcast and video. So stick with the specialist publications if you are really interested in this debate, says Masood.

Masood authored a Panos report – The GM Debate – Who Decides? An analysis of decision-making about genetically modified crops in developing countries – to unpack a bit about where the decisions about GM are made, and a survey of the media coverage of the debate. How free is a writer and who has access are the two main questions asked in the media part of the report.

Masood’s final point is about public relations, or the dark arts, as journalists like to refer to the profession. With the time pressure of the 24/7 news agenda, PR has become an increasing source of stories for journalists – whereas once journalists had time to find their own stories. The other point is that the news agenda changes so quickly, there is less likelihood of one story dominating the press.

Now Erik Millstone takes the floor. He’s well-placed to comment on Masood’s comment of ‘don’t believe the press’, says Dickson, because there is an article about his work in the Guardian today.

Millstone kicks off with the idea that media reportage is a highly plural term, the media is not on just one side of the GM debate: “Print and broadcast media constitute a well-differentiated cacophony,” says Millstone. And there is also a policy cacophony.

And, Millstone says, this may shock some people, but he believes this media and policy cacophonies are to be welcomed and has beneficial consequences in terms of the ways in which “we have, as scholars, conceptualised science in terms of policy-making and in practice in the way that policy-making has been institutionally structured and organised.”

The cacophony has discredited some simplistic representations of this debate, says Millstone. The first representation to be discredited is what he calls the technocratic model – that policy is based only on sound science. That model was torpedoed by the cacophony and it revealed the uncertainties. Now on to the Red Book model – that policy-making should be a two-pronged process that science does a risk assessment and then values and practicalities, the politics, comes in to view. But this has also been torpedoed by the cacophony because it revealed that it revealed uncertainties and competing risk assessment policy framing assumptions. And then there comes the co-evolutionary ‘transparent’ model: that there are reciprocal links between science and policy. So, for debunking over-simplistic models, this cacophony is inevitable and beneficial and should be welcomed concludes Millstone.

Ranjana Smetacek steps up now and immediately quips that she is “stepping in to the lion’s den”. There is a struggle with mainstream media, she says: “Are they there to convey the accurate truth or are they a slick package to be sold?” Media in the west is instant, says Smetacek. “And given that we have instant journalism, what works better is instant slogans such as soundbites that capture the public imagination. Some of the opponents of biotech have done this very well.”

The GM debate is not black and white, says Smetacek, but it is the mainstream media that gets messages out to more people, she says, countering Masood’s point. Moving on to her experience working in India by making the point that even in this day of instant media, there are people out there trying to write balanced, fair stories in India, “And that’s the best we can hope for in this debate – balance,” she concludes.

Rod Harbinson begins his address by saying he sees his role at Panos as stimulating the cacophony that Millstone talked about, and to have some level of quality about it – so that journalists have some quality information, particularly in the developing world where this is sadly lacking, Harbinson says.

The cacophony doesn’t exist to such an extent in the developing world and the debate about these issues is few and far between. The breadth of sources journalists refer to is very few and government announcements are very high on the list of sources that journalists quote. There is an important role for the media to generate debate and provide scrutiny about the GM debate.

Other positive dynamics of the media and its reporting on biotech include involving the public and stakeholders in the debate, and disseminating accurate messages on GM, as well as new media helping citizens have their own views represented in policy-making domains.

But on the negative side in developing countries are worries about stories being spiked (axed) by media owners because of worries about offending advertisers, and the possibility of self-censorship – a difficultly in China, for instance. Press junkets paid for by corporations, misinformation due to self-interest and misinformation due to journalists not understanding the issues and having a poor skills base – a huge problem in developing countries, says Harbinson.

“I’d like to hear how much proponents of GM would like to take part in participatory meetings with the people they purport to benefit, such as small, poor farmers,” he concludes.

And now for some thoughts from the panellists on what the other panellists have said as well as some questions from delegates. Smetacek questions whether its developing country journalists that are the ones giving out misinformation, and she launches in to some choice headlines from the UK press including: “Fears about killer crops” from the Guardian and “Can Frankenstein foods harm your baby” from the Daily Mail. “I wonder if it’s not the developing world where you really have to play to the gallery,” she observes.

Smetacek goes on to point out that in India one of the problems of getting across the nuances of the GM debate is that there are 17 officially-recognised languages: “It is important to raise the level of debate and it is important to recognise that just as journalists have agenda, so does just about everybody else.”

On the point of reaching out to farmers, she says they do need a voice and there are some efforts to do just that, but it was unclear if Monsanto was involved in the efforts she was talking about.

Harbinson said one of the problems he encounters is journalists sitting at internet terminals in capital cities and not getting out and about. He also felt strongly that “the target for GM crops is small, poor farmers, yet they are almost entirely excluded from this debate.”

Millstone agrees that farmers’ voices have not been heard and that this is a problem the STEPS Centre hopes to address.

Masood responds to a question about user-generated content, and says there is not much in agricultural biotech because of the cost and access issues, but added that the user-generated content we see on the 10 o’clock news is all paid for. So it is another blurring of the lines between user and producer.

Harbinson mentions some of the initiatives Panos is undertaking to help boost the voices of poor farmers including a very interesting sounding project called radio listening clubs whereby programmes are made for farmers, for instance, and their discussion after hearing the programme is also recorded and then played back to policy-makers – “it’s a complete feedback loop” he says.