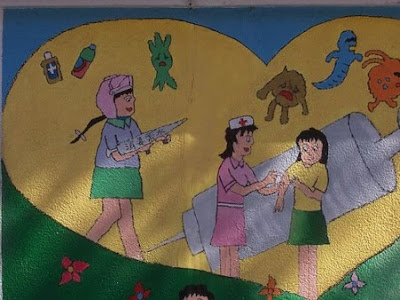 STEPS Centre researcher Paul Forster is blogging from the International One Health Congress in Melbourne. This is the first of his posts from the Congress.

“Are you from the human side, or the animal side?” The question came from a doctor – an epidemiologist – from Bangladesh. Hmmm. We were twelve hours adrift from London, and it was the first coffee break of what was meant to be the morning at the 1st International One Health Congress in Melbourne. Subtitled (just a shade dramatically) ‘Human Health, Animal Health, the Environment and Global Survival’, the congress has drawn around 650 global delegates to drive forwards a still-fluid agenda fostered most largely by (in reverse chronological order) the emergence of bird flu, SARS, and HIV-AIDS: all diseases which have crossed the species barrier from animals to infect, and kill, humans. Feeling barely human myself (i.e. capable of speech), I launched into my socio-politico ‘science isn’t everything’ pitch, wondering why there are no doctors, yet, who are charged with attending full-time to the environment.

My questioner had however put his finger on one nub of the issue – the institutional, educational and even emotional divides that separate human health issues from animal health issues, which are well-characterised by another, more rhetorical, question put to me later in the day. “If your Prime Minister, or my President, had the Minister for Health and the Minister for Agriculture sitting across his desk and they did not agree, who would he take most notice of?” Accepting the fact that animals don’t have votes, the point had to be accepted, although almost three-quarters of the world’s new diseases since World War II have been transmitted to people from animals, a total of around 30 in the last twenty-five years – the most recent of which, H1N1 influenza (‘Swine flu’), spread around the world from a pig farm in Mexico in just nine weeks.

Drawn by the promise of “an exciting week of ‘One Health’ science”, the attendees appeared largely to have subscribed to an important, and somewhat humbling, concept. Most medical doctors dealing with infectious diseases are delighted that an issue obvious to them is being taken up more widely. Veterinarians are pleased that their professional importance in the global order of things, scandalously underestimated to date, is being recognised. Epidemiologists on both side of the divide are delighted to be able to say, with a knowing smile: “humans and animals are biologically exactly the same”. Political scientists might wish to nuance this slightly, but the point is well made, and well taken. It also provides social scientists with all manner of opportunities to examine and re-examine relatively difficult concepts such as uncertainty, and to stress relatively simple ones such as social justice.

Given that the ‘One Health’ concept, first formulated in 2004 by the Wildlife Conservation Society in New York, is now six or seven years old; and that the notion has been enthusiastically taken up, and developed, by the international agencies charged with responding to avian and pandemic influenza from 2006 onwards; three big questions – at least to this participant – hung over the first day. (1) What happens next? How is this concept driven forwards so that change happens urgently over the next year or two, rather than incrementally, over the decades that it takes for a new generation of health professionals to be trained? (2) Given the willingness of the two major international agencies concerned – the United Nations World Health Organization (UN WHO) and the United Nations Food and Agriculture Organization (UN FAO) – to engage, both conceptually and practically: whither the (officially non-UN) Paris-based World Organisation for Animal Health (OIE), which appears determined to maintain a shadowy, almost non-existent, presence on the sidelines? (3) Perhaps most importantly, who stands for the environment in this professionally-charged debate?

It (the environment) could set a conceptually simple, solid, and popular foundation for the entire enterprise. As it turned out, it was about the only relevant entity I did not hear discussed on the first day of the congress. Human health or animal health? Put it in those terms, and I am cheering for environmental health.