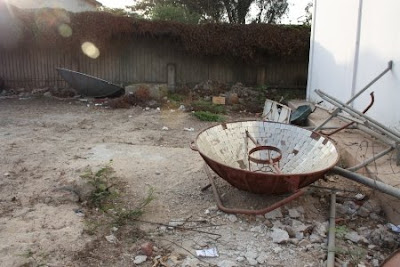 Photo: Solar technology in the CIFRES carpark, by Adrian Ely

In the car park of the International Centre for Training and Research in Solar Energy (CIFRES) in Dakar, lie the remains of successive attempts to introduce solar technology into Senegal. Each day the researchers drink tea prepared in a solar oven based on the principle of the greenhouse effect, but the same technology has not been taken up widely in villages across the country. Now researchers are trying a new approach that involves community members from the outset.

It has long been recognised that the introduction of technologies without regard to people’s cultural contexts and preferences often ends in low adoption and ineffective use. The introduction of solar cookers in Africa in the 1970s largely failed due to cooking preferences amongst local women – they were afraid to burn their hands, preferred not to cook outside at noon and in any case reserved their traditional ‘stove’ for evening cooking. The parabolic cookers in the car park are a testimony to such failures. Now, however, CIFRES is experimenting with the same technology for various forms of food processing, rather than the more culturally-sensitive activity of cooking.

The researcher in charge of solar thermal technologies at the Institute tells me that they have learned from these experiences. They now recognise the role that social scientists, anthropologists and – importantly – users can play in guiding the development of the technology, as well as making sure it’s used widely, and that it’s economically viable and socially useful. A team of researchers is now visiting villages twice a week over a period of months to discuss the various oven designs with women, and to experiment with local artisans on how they can be manufactured using local materials.

Clearly, this kind of research can help move towards more just and sustainable outcomes for the users of the technology. What other methods can be used to guide innovation through understanding social and cultural factors? The STEPS Centre is currently undertaking a project entitled “New Models of Technology Assessment for Development”, financially supported by the Rockefeller Foundation. We are investigating ways in which communities and other stakeholders can be brought into technology assessment processes, which have traditionally been limited to technical debates. Beyond involving an increased degree of participation (for example through citizen panels or juries), the “new models” are more global than previous approaches (a couple of examples are Worldwide Views on Global Warming and the International Assessment of Agricultural Knowledge, Science and Technology for Development (IAASTD)). As discussed in a report produced last year by Richard Sclove (2010), they may also be conducted by flexible networks of actors, and can take place virtually (rather than within formal, rigid institutions like the former US Office of Technology Assessment). Networked governance structures are advocated in the STEPS Centre’s New Manifesto, which suggests national and global bodies to evaluate innovation activities with the aim of improving their outcomes for sustainability and development. Could these networked technology assessments, building on lessons from previous initiatives, inform policies and strategies that drive innovation in better directions for communities in developing countries? If so, the solar cooking stoves of the future might be used for more than a few cups of tea.