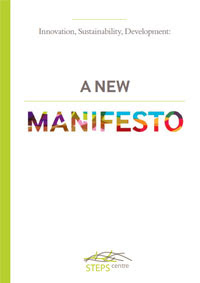 Innovation, Sustainability, Development: A New Manifesto is a year old! It’s been a busy year. In the time since the launch of the Manifesto, we’ve been engaging with an increasingly diverse set of academic and policy networks around the world about how science, technology and innovation can work in more socially just and sustainable ways.

One of the challenges we received when launching the New Manifesto at the Royal Society last June was “what does this mean in particular places and contexts – give us examples!” The Manifesto’s recommendations were deliberately broad, but it was clear that its users would benefit from case studies from around the world to clarify and illustrate the Manifesto’s ‘Areas for Action’.

Over the year since the launch, this has been our main area of activity. Elisa Arond has been working with Latin American partners, whilst I have collaborated with colleagues at the African Technology Policy Studies Network (ATPS) and the National Institute of Science, Technology and Development Studies (NISTADS, India) to produce examples. They will be published on the Manifesto website later this year.

Both of these partnerships have also led to events that have enabled us to build on some of last year’s discussions. I spoke alongside Kevin Urama at the 2010 ATPS annual conference in Cairo, where the African Manifesto on Science, Technology and Innovation was formally launched. The African Manifesto, which grew out of the SET-DEV (Science, Ethics and Technological Responsibility in Developing and Emerging Countries) project, has also since been discussed at high-level events involving policy-makers and stakeholders from across Africa and elsewhere, an encouraging sign that its messages will have a concrete, positive policy impact.

A conference in Delhi later this month (28-30 June) will provide a timely opportunity for learning and reflection with our partners in India. Co-hosted by NISTADS, CDS-Trivandrum and the STEPS Centre, the meeting will use both the STEPS Manifesto and the updated ‘Knowledge Swaraj’ manifesto as entry points to broader discussions around innovation, sustainability and development in India. Technical sessions will focus on innovation in the agricultural, health, ICT and energy sectors, and the final morning will be dedicated to discussions around grassroots innovation and traditional knowledge. The same event will see the formal launch of Indialics – the India chapter of Globelics (an international network for research into ‘Learning, Innovation and Competence Building Systems’) and the new journal ‘Innovation and Development’.

The STEPS Centre has linked up with many other networks via the New Manifesto project, each inspired by a common vision that sees science, technology and innovation working more directly for poverty alleviation, social justice and environmental sustainability. The Centre looks forward to taking these partnerships forward through targeted impact and engagement work in its second phase through to 2016.