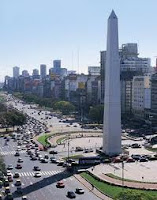 Innovation for inclusive development was a resounding theme in the introductory session of the 9th Globelics Conference in Buenos Aires on 15th November. Ministers, the Governor of the Province of Buenos Aires and the academic presenters celebrated Argentina’s focus on innovation, but highlighted the main challenge to the conference – developing innovation policies that generate improved livelihoods for the bulk of the population, rather than those that leave some (in some cases the majority) behind. (Photo: Buenos Aires).

Innovation scholars from Europe and the USA gave their perspectives on the challenges for the participants in Buenos Aires. Bengt-Åke Lundvall introduced Globelics and its key aim – to strengthen research capacity in innovation studies and policy. From 450 full papers submitted, the organisers had selected 240 for presentation over the coming three days.

Luc Soete highlighted the developments since Globelics was established and described a world which could hardly have been imagined one decade ago. He highlighted the increased interactions between the local level (‘localics’) – where building human capital is at the basis of learning and innovation systems – with the global level, where the ‘Washington Consensus’ was giving way to a consensus aligned with the approaches favoured by the ‘G5 group of emerging economies’.

Richard Nelson reflected on Schumpeter’s earlier work and the implications of ‘creative destruction’ for different sections of society. Highlighting the fundamental need for strong education systems and the important role of public sector expenditures (as well as the activities of business firms) in innovation systems, he also explained that countries showed a variety of patterns of innovation-based development.

Some countries (e.g. Japan, Korea and Taiwan) have succeeded in lifting the bulk of their populations whilst others (like Brazil and China) have displayed technological ‘catching up’ in a small section of the population, whilst a significant fraction of the population has been left behind. He posed this as a specific challenge to Argentina.
From the talks of the policy makers present, this already seems to be a key focus of the Argentinean government as Cristina Fernández de Kirchner enters her second term. Establishing the new Ministry of Science, Technology and Productive Innovation and implementing talent programmes that have led to the repatriation of more than 800 scientists who had left the country because of poor opportunities are just two recent policy actions, and targets such as 1 graduate (7 years training) for every 4000 inhabitants illustrate the ambition of the administration.

At the same time, Argentina’s vision to diversify the economy will require the participation of different actors, for example through new linkages between universities and the private sector. Through new policy approaches, science, technology and innovation can thus contribute not only to a system based on production rather than financial speculation, but also to development opportunities that are more widely distributed through the economy.

With this challenge, the conference participants start their discussions, drawing on evidence and analyses from across the world. Among these is a panel session convened by the STEPS Centre and partners from Buenos Aires. Dedicated to ‘Innovation for Social Inclusion and Sustainable Development’, the session is due to respond directly to the challenge set by the introductory speakers.