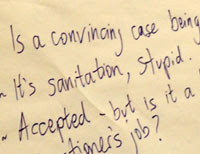 The Water Symposium’s all over now – photos from the symposium are on our flickr – but we’re still digesting some of the debates and discussions.

For now, some highlights from Day One, which was mostly taken up by a healthy discussion on climate change:

Kirsten Hastrup from Copenhagen University said that water is an “elemental” or “elementary” factor. (I’m not an anthropologist, so apologies if i’ve misunderstood the terms, but it makes sense to view water as an “element”, where if problems arise, crisis ensues.) We need certainty to act in a responsible way – but in many places, local certainties are being undermined by the fear and uncertainty caused by climate change.

Declan Conway from UEA talked about variability and uncertainty too, but focused on the problems this causes for allocating climate change adaptation funding, among other things. Climate change messes around with thinking based on “stationary” management systems, because we can’t fully predict how things will be in 5 or 10 years’ time.

Merylyn Hedger (IDS) replied that the science was a bit more certain than that implied (we know dry places will tend to get drier, for example). But she also raised the subject of climate change adaptation funding agreed by developed countries, who may be paying out a lot in the near future. However, this money may well be separated – almost boxed away – from Overseas Development Aid. So the development money and the climate change adaptation money may be in different hands and not co-ordinated in some developing countries – that’s not necessarily a good thing.

Finally, the “wicked problem” of the EU Water Framework Directive was used by Laurence Smith (SOAS) to illustrate how many conflicting (and valid) voices there can be in policy planning – farmers, consumers, academics, government, the water industry… There’s a long time horizon for “cleaning up” water (loosely, what the WFD is for), but the goalposts will shift over time with climate change – not forgetting the changes in the agricultural market. The best way to involve experts is through a process which keeps coming back and checking what the needs are over time.

That’s just one session. More to follow on urbanisation, sanitation, disease, access rights, and ways forward for research/policy/practice, though not necessarily in that order…