In Hubei Province, I was fortunate to be able to visit two villages and, with the help of an interpreter, talk to several local people about their perspectives on local agri-environmental conditions and the prospects for rural development. Whilst expressing their appreciation of some of the government’s policies, it was clear that many farmers continue to face significant hardships. (Photos: Adrian Ely)

In the first village we visited, we were shown around by the party secretary of the village committee, who was present at all of our discussions. He was an enthusiastic and friendly man, and generously took the afternoon off to introduce us to several members of the community, all of whom he knew well. The first person he took us to see was the former party secretary of the village, a 68-year-old retired farmer who used to work 10 mu of land (approximately 0.7 hectares), but who now relied upon his 7 absent children for support. He would prefer to be able to rely on insurance and a pension, but nevertheless concluded that living conditions in the village had improved greatly in his lifetime. Our discussion was called to a halt when he received a phone-call inviting him to play cards with friends in the village.

The second was a woman whose son worked for the county government (and who was also there during our discussion). She also relied on her children, including him, for support. In addition her husband, who had worked in the construction industry in Wuhan, had been able to save some money so despite the absence of a pension they were relatively secure. This was the general feeling amongst those who we spoke to, however I was aware that this was a small cross-section of the village. The non-random nature of our introductions would not be suitable in a formal research context, however was a useful way to gain a brief insight into the context in which these individuals lived.

One aspect of the central government policy that received unanimous appreciation was the move to absolve rural village farmers from various taxes, which, according to the 2007 work report delivered by Premier Wen Jiabao earlier this year “had been collected on grain farmers in China for more than 2,600 years”. Technology had also had an impact, and I was surprised by the number of households with mobile phones and televisions (of which the village secretary had three!) 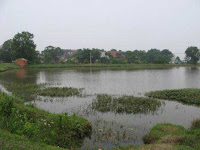 According to one woman farmer, fertilizers and pesticides had increased productivity, but may have had environmental impacts. She pointed to the possibility of groundwater pollution and cited as evidence a decrease in the number of frogs (which she also identified as good for natural pest control) in the nearby fields and ponds (see photo)

On the second day, we were again welcomed by two village leaders, who were understandably busy with other business and therefore invited us to meet and talk with villagers as we wished. We took the opportunity to talk directly to some farmers, learned of some of the challenges they faced and discussed their responses. (see photo at top of post)

One couple who we talked to told us that they had bought “fake” fertilizer and cotton seed, which had not germinated despite four attempts at planting. They had purchased the seed from a merchant in the nearby town who was known to them. Although it had been expensive (a well-known brand), he had assured them on the basis of the marketing material that the seed was highly productive and resistant to insects. When we asked how they chose where to source their seeds, they indicated that they relied on personal contacts due to their relative lack of knowledge of the subject area. The same person had sold them inadequate seed last year as well, however they would still return to him next year as he had promised that next year it would be good quality.

Shortly afterwards the secretary and head of the village arrived and joined in the discussion. They suggested that it was not the quality of the seeds that was at fault, but the farmers’ practices – they had planted the seeds at the wrong depth in the soil, or had timed the planting wrongly in relation to the rains, and the weather had been bad – there were many reasons for the crop’s failure. This was obviously a complex matter, and one in which contested viewpoints and claims to knowledge existed even at the village level. 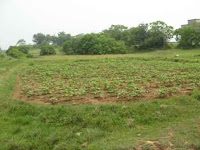 The village leaders then showed me another field of cotton, which they described as being “very successful” as a result of the use of organic fertilizer, in this case pig and chicken manure, (see photo). The farmer had also used an “insect resistant” brand of cotton, however had also had to rely on insecticide because, the village leaders said, “the insects had changed”. The planting and tending methods were the most important aspects in the cotton’s success, according to the village leaders. Nevertheless, I also wondered about the ways in which the farmer of this plot (who was absent) had ensured the quality of his seed.

With partners, the STEPS Centre is keen to investigate the challenge of seed regulation and governance as part of a project looking at China and Argentina. As well as the links between formal regulatory frameworks at the global, national and local levels, the “Rethinking Regulation” project hopes to investigate the informal regulatory practices that emerge to fill the vacuum when global regulatory framings do not map neatly onto diverse local realities. My visit to Wuhan provided me with a brief, but very useful introduction to some of the issues involved.