Agriculture, and the agronomic research that supports it, will be critical in making sustainable, equitable and secure development a reality. Surprisingly however, there seems to be increasing contestation around the priorities and methods used by agronomists, and the technologies that they develop and promote. Why is this, and is it a problem?

Taking a step back help put this into perspective. Every year thousands of students are advised that a compelling dissertation or thesis must engage with an important debate. A debate is contention through disciplined argument. It implies a testing of different views or positions, and conceptual, methodological or evidential tension.

And academic engagement suggests that the different arguments in the debate are picked apart and weighed, that evidence and counter-evidence is analysed critically, and that something new – in terms of theory, concepts, evidence or analysis – emerges from this process. In principle it is through the dynamics of debate and engagement that new ideas about complex questions or problems are generated and scientific knowledge is advanced.

From this perspective, lively debate and vigorous contestation are at the centre of agronomic knowledge production. It is argument and open and critical scrutiny of ideas and evidence which elevates agronomy to a science.

We are not therefore in the least concerned by debate, argument or contestation, as these are nothing more or less than the signs of a healthy discipline. After all, who could possibly be enthusiastic about a world of uncontested, consensual, neutral or plain vanilla agronomy?

Is the contestation within agronomy healthy?

Fortunately, we see quite a bit of debate within development-oriented agronomy. As measured by the H-index, over the past decade relatively new topics such as organic agriculture, agro-ecology, conservation agriculture and the system of rice Intensification have received considerable attention, and compete with more established topics such as the green revolution, Bt cotton and precision agriculture. 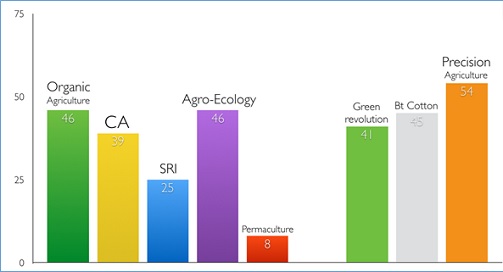 Since contestation is healthy and happening within agronomy, can we conclude that the discipline is sufficiently “fit” to meet the great expectation of sustainably feeding a rapidly growing world population? Not quite. We are deeply disturbed by some of the ways that contestation is being pursued, and what these say about the current state and possible futures of the field of development-oriented agronomy. Publically funded, international networks act as gatekeepers, refusing to distribute research that contradicts or calls into question the technology or system they promote. Articles masquerading as scientific papers are published in peer-reviewed agronomy journals, but they make no reference to a significant and publically-available body of contradictory or complicating evidence. In effect, inconvenient evidence is “blanked”. For example, a recent high profile publication on a rice management system stated that its objective was to review “the scientific literature that supports…” (emphasis added). Is such a selective approach not a wholly unscientific way of engaging with the scientific literature and furthering constructive debate?

Turning up the heat in agronomy

We believe there is a critically important job to be done in analysing and opening to scrutiny the whys and wherefores of growing contestation within contemporary development-oriented agronomy. It is this belief that motivated us to organise the upcoming Contested Agronomy conference.(Read the framing paper: Knowledge politics in development-oriented agronomy (PDF).)

The conference, supported by the ESRC STEPS Centre and hosted by the Institute of Development Studies, the Plant Production Systems Group, Wageningen University and the International Maize and Wheat Improvement Center (CIMMYT), will seek to bring new insights to the understanding of knowledge politics within development-oriented agronomy, and the implications these raise for the discipline and for agricultural and food systems in the developing world.

We offer the figure below to help stimulate the debate. Four bases of contestation are identified: technical, tactical, foundational and personal. The suggestion here is that over the last three decades the basis of contestation within and around publically-funded development-oriented agronomy has moved progressively from left (technique) to right (framing, epistemology, and values).

Contestation in development-oriented agronomy: turning up the heat

Areas of contestation under each of these headings include:

Does this hypothesis hold water? What are the factors and forces that turning up the heat? What has been the role of funding organisations and institutions such as networks and journals in supporting or counteracting this movement? And ultimately, who gains and who loses from these dynamics of contestation? Discuss.