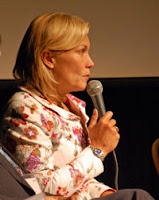 It is the turn of the big-hitters this afternoon, with a panel made up of water Ministers from around the world. They were tasked with revealing how they plan to bring water and climate change together to advocate for stronger global action at the forthcoming climate change negotiations in Copenhagen, COP-15. With time running out before COP-15 – just three months to go – rousing language and calls to action were the order of the day. (Photo: Gunilla Carlsson / Julia Day).

Usually the water and climate change communities operate in their own silos, which many believe will hamper potential outcomes at COP-15. But with the crunch creeping ever-closer, can the two areas of interest work together for mutual benefits?

To kick us off, Henk van Schaik, of the Cooperative Programme on Water and Climate (CPWC) offered us and the Ministers some reflections on the week’s key issues so far.

Mr van Schaik, said the relationship between climate change and water management has been a key area of discussion throughout the week: “We should not wait for a silver bullet on climate information, but make use of credible climate scenarios such as coastal protection, agriculture, hydro power and drinking water supply, and response measures should be designed accordingly.”

The financing of projects, capacity-building to establish climate information centres and networks in the public domain, making use of local traditions, as well as local, country and regional ‘no regret’, best practice, actions were all hot topics, according to Mr van Schaik.

Heading towards COP15, it needs to be recognised that water is more than a sector, it is a medium, he said. The Nairobi Statement on Climate Change Adaptation for Land and Water Management has already stressed the links between land and water and climate in relation to the development agenda and development resources.

“The water community stands ready to cooperate with the climate community on planning processes, actions and capacity,” said Mr van Schaik. “For the (upcoming) World Climate Conference, we call for service-oriented climate information, for climate information to be seen as a public good, and for the development of regional climate centres and networks,” he concluded.

Reflections from Karin Lexen, of event organiser the Stockholm International Water Institute, said she though the key message from this week was one of support and appreciation for the hard work going in to reaching a strong and fair agreement on climate change and that water is key medium through which climate change impact will be felt. As such, water as a medium for climate adaptation should be properly addressed.

Ms Lexen said managing water resources effectively is central to successful adaptation planning. Adaptation measure needs integrated with other development goals – including the MDGs – as well as with land and forest management and ecosystem protection.

She was one of many this afternoon calling for the sharing of information between water and climate change communities at all levels. Vulnerability assessment was also critical, she said, but both new and additional investments were needed to fund the necessary work.

Tineke Huizinga, Vice Minister for Transport, Public Works and Water Management of The Netherlands said that with COP-15 only three months away, she was glad the role of water management in adaptation has become common ground.

“Adaptation will be one of four blocks of negotiation at COP15. Water management deserves due attention and can’t be missed in adaptation strategies of any country therefore water cannot be missed in the COP statement,” said Ms Huizinga, adding that water does not respect boundaries, and that climate adaptation needs to be placed in context of water basins and river courses.

“In the context of development challenges, water can be a driving force behind development and reduction of poverty…Good water management is essential in reaching seven of the MDGs,” she said, adding.

She too, joined the calls for water community to come together with other ‘sectors’ ahead of COP-15: “We have a lot in common with the development community therefore we should join forces.” And she added her voice to those calling for the sharing of knowledge and best practices across sectors, countries and regions.

“It is now time to act on adaptation, we must prepare ourselves,” said Ms Huizinga, “This would be an amazing opportunity to link development and water to reach the MDGs.”

Tanzania’s Minister for Water and Irrigation, Mark Mwandosoya, told the audience that climate change scenarios in Tanzania suggest temperature increases of between 1-3 degrees centigrade over next 100 years. Floods and droughts are going to become even more frequent, said Mr Mwandosoya, and in a country where agriculture jobs account for 80 per cent of the work force, water is crucial: “Water is life. It is a key resource as it affects all other sectors of the economy.”

Gunilla Carlsson, Minister for International Development Cooperation, Sweden, made some strongly-worded statements about her government’s stance ahead of COP-15.

“All countries need to take action to provide sustainable development. Climate change is felt everywhere, we can already see it is happening, but it is affecting the poorest first and worst,” Ms Carlsson said.

She went to some lengths to stress what she called the ‘human dimension’ underlying climate change – that individuals and communities are already adapting to climate change, so the capacity for people to continue adapting needs to be built, she believes: “There is a huge need for adaptation measures – but it is equally important to build adaptation capacity so humans can deal with the changes – so we need further invest in education and health and social safety nets.”

And the issue of gender equality is key, according to the Swedish Minister: ““For the majority of woman a better life depends on safe, fresh water…they have a crucial role in all water activities.”

Syed Ashraful Islam, Minister of Local Government, Rural Development & Cooperatives, Bangladesh bluntly stated what he – coming from the most densely-populated nation on Earth – sees as the basic problem: “We have a limited amount of water on this planet but the users of water are increasing…the world’s population is now 6.5 billion but by 2050 it will be 9.2 billion.”

But his main issue was that of transboundary water management, which he does not believe has been discussed enough: “Bangladesh alone has 57 common rivers with other countries…We have found that it is often difficult to come to a consensus for sharing water of the rivers and we are lacking international mechanisms and understanding in UN on how to share common rivers.

“Today we must find a better mechanism for sharing of the water of common rivers and if we fail to do so countries will face increasing problems,” and he called for the World Water Week statement to agree on some common ground on this issue ahead of COP15.

“We must adopt a resolution in Copenhagen for all UN states to share common rivers and water bodies in a better way and we must correlate water management with land and forest management,” said the Bangladeshi Minister. “If we don’t, water management [alone]will not give us enough benefit.”

And he concluded on a very dramatic note: “We need the planet for our survival but it does not need us. Before we were here the dinosaurs ruled the planet – they are no longer here but the planet is. The way we are behaving, we will go the same way as the dinosaurs.”