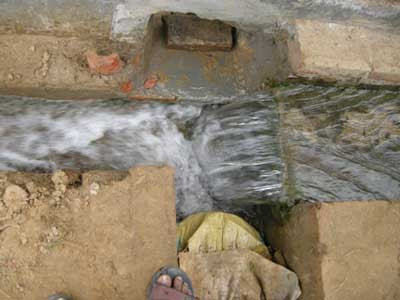 By Alankar and Bhagwati from Sarai

Some poorer communities on the fringes of cities in India don’t get the best access to water, either because they’re not covered, or only partly covered by the formal state-provided water system. They are now fighting back by designing systems to get the resources they need. Photo: Self-designed drainage system in Karhera, Ghaziabad, Uttar Pradesh

People in one village, Arthala, have come up with a radical solution – to cut themselves off completely from the water supply and to design their own arrangements. In another, Karhera, villagers built their own complex drainage system which irrigates the fields using wastewater from the village.

Our project on peri-urban sustainability has been looking at how people in areas like this are cut off from services by discrimination, bad planning and lack of understanding from authorities. We have been looking at how villagers are coping in these two villages, which lie in the Trans-Hindon area of the Ghaziabad district in the state of Uttar Pradesh in India.

Karhera is an agricultural village sitting next to cultivable fields. It is only partially covered by the formal public water supply.

The formal system is not only poorly provided – it’s also not appropriate for the village’s needs. Many of the villagers depend on one of two options: drawing groundwater from submersible pumps they install themselves, or relying on the municipal water provision, which is perpetually short in supply.

To make the system as beneficial as possible to the farmers, the big drain has smaller openings/outlets in its course, which are routinely closed and opened to allow waste-water to flow into different fields. The most interesting feature of this entire process is the very efficient management, collectively done by the villagers, of all the smaller drains which run within the village and feed into the bigger drain. 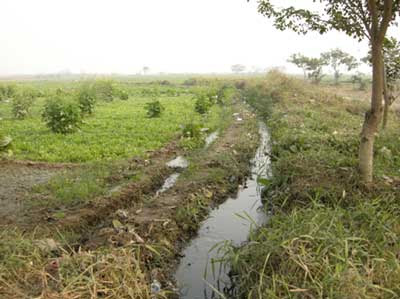 From a theoretical perspective, such a scheme can be most appropriately understood as ‘environmentalism of the poor’.(1) As per this academic perspective, the poor communities and their environmental approaches need not be classified as merely conservationist but rather should be seen as an outcome of their preferred strategies related to their livelihood and as part of the lived experiences. If the villagers in this particular case are mostly dependent on cultivation, then they also have formulated and implemented a scheme which uses every form of water available to them as a resource.

Arthala is made up of mainly residential settlements. Most of these are inhabited by people with low incomes who are employed in informal or casual labour.

In Arthala the public water service is even worse: vastly inefficient and inadequate. Discrimination also seems to be at work. Nearby, newly developed upper-class residential areas (for example Vasundhara, which has settlers from various cities, mostly Delhi) have been provided with very good water supplies (drawn from the river Ganga, flowing far away from the Ghaziabad region). Arthala, a much older settlement, has been left under-served, relying solely on old supply system based on groundwater extraction, which is acutely inefficient and inadequate.

Recently, a radical step was taken by Sanjay Colony (part of Arthala). In response to the poor municipal supply, Sanjay Colony decided in early 2009 to voluntarily cut themselves off from the formal state-provided water supply system. In its place, they devised and implemented a self-designed system for water provision.

The residents raised money in the community, then installed a high-capacity submersible pump in a local temple. The pump withdraws groundwater, and is connected to a small but intricate network of pipelines (again self-constructed), connecting to all the neighbouring households who had contributed financially to the new system. 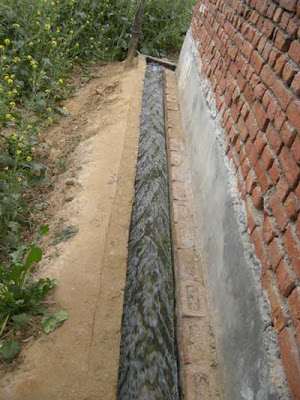 At the time of our field visits, negotiations were going on with the local elected legislative representative (ward councilor), to convey to the municipal authorities the need to officially recognize and legitimize this new ‘private’ system; and to ask them to waive the tax which the residents have been paying for the municipal supply.

Graham and Marvin (2001) describe how the rich and powerful are often seen to be voluntarily disassociating from the formal networks of different utilities, like power, water, health, transport, etc., due to the inefficient and inadequate state provisioning, and in place seek private and personalized systems for such services. (2) In this case, though, a community of poor people are deliberately disconnecting themselves from an inept and insufficient public-provided water service. In its place, funded by their own meagre incomes, they have put up a viable and fulfilling supply system.

One of the core objectives of the Peri-Urban Sustainability research project is to track the diverse pathways (i.e. ways in which interacting social, technological and environmental systems co-evolve over time) and assess which ones can address the needs and interests of marginalized and disenfranchised groups in ways that enhance Sustainability.

From the above two specific instances, some newer understandings can be discerned. In Karhera, the villagers have evolved and maintained their own specific method of using wastewater to benefit their cultivation practices and needs. Thus, in turn they are shaping a contour of sustainable use practice as perceived at a very local level.

In Arthala, residents put into place a ‘private’ form of self-managed supply, which is also discontinuous with the state-provided supply. Arthala’s case shows how governance is also impacted at the local level with the interventions of the constituents of political society (comprising mostly poorer people, and different from the formal citizens belonging to the realm of civil society).(3)

(3) Partha Chatterjee finds special relationship between the masses and the state in India, which gives rise to what he calls ‘political society’, that is distinct from civil society. For a better conceptual clarity between political society and civil society, see Partha Chatterjee (2004) ‘Politics of the Governed; Reflections on Popular Politics in Most of the World’, Columbia University Press.