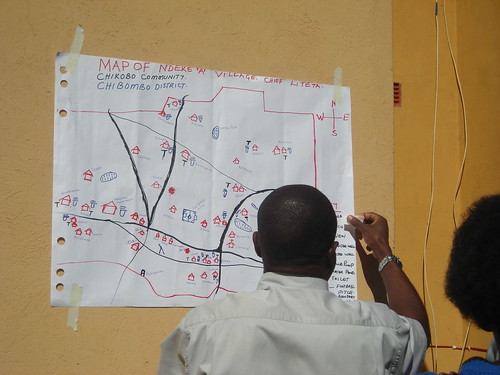 Photo: Map of sanitation in Ndeke village, Zambia, from the CLTS Flickr photostream

We live in uncertain times. If you’re looking for something that embodies the changing and conflicting forces of politics, power, the environment and human relations, you can’t do much better than water. It’s a source of life, through drinking water and agriculture; and a bringer of death and destruction in the form of floods or water-borne diseases.

A team at the STEPS Centre have been looking at the dynamics of water & sanitation, and at a recent Symposium, explored four broad areas which contain important challenges for 2011 and beyond. We’ve just produced a Working Paper summarising the symposium (PDF), and an accompanying briefing (PDF) which explains the areas discussed. Here, though, is a quick look at some of the big issues:

The scientific understanding of the impact of climate change on water isn’t complete. As climate change continues, things get more uncertain and variable, and extreme events occur. For policy makers and managers, who need things to be predictable (or at least have some measure of risk) this causes a problem.

What may help is a new understanding of uncertainty which recognises different kinds of incomplete knowledge – not just risks and probabilities.

Over a third of city-dwellers live in slums. In Africa, some governments have tried to fight against rising urbanisation by limiting services, rather than respond to a growing need. Many people access water & sanitation in informal ways, sometimes deliberately opting out of the formal provision. Again, this presents a challenge for sustainability.

There is a major gap between sanitation policy and what’s happening on the ground. An equally big challenge is encouraging people locally to adopt more hygienic practices that work for them. Community-Led Total Sanitation is a growing response to this, allowing people space to develop their own sanitation systems – and also feeding back some of this learning to policy makers.

Technology is often developed in response to a problem. But when the ecological landscape is changing and uncertain, it makes it difficult to ensure that a specific technology will help. The way people behave around a technology, and use the systems provided for them, adds an extra layer of uncertainty.

In many places, access to water is unfair, and rights of access often emerge through struggles. People don’t come to think of access as a right, until they have mobilised and started making demands. One big challenge is how to recognise and highlight the needs of people who are often marginalised and excluded from decisions about water and sanitation.