A few weeks back, Ian Scoones, representing the PASTRES project, joined Andy Catley and Peter Little in a webinar organised by the Feinstein International Center at Tufts University, and chaired by Greg Gottlieb, the Center’s director. The one-hour webinar, aimed at policymakers, donors and field practitioners, can be listened to again here. It gets going about 6 minutes in.

The occasion was the publication of an excellent new synthesis report and briefing paper based on over 20 years of research on pastoralism in the region. Among other things, we debated issues of pastoralism, alternative livelihoods, and ways to support resilience, in the context of on-going drought in East Africa.

My co-panellists know a lot about pastoralism in the Greater Horn of Africa. Their research has been ground-breaking. Andy’s work with Yakob Aklilu on processes of differentiation within pastoral societies is essential in understanding how pastoral systems are not static, and are affected by changing classes of pastoralists, with and without livestock, and being connected to the pastoral economy in different ways. Peter’s work with the PARIMA CRSP team has provided massively important insights into risk management strategies in changing pastoral systems, while his older work on ‘absentee’ herd owners highlighted the importance of changing ownership structures in pastoral systems.

The report and associated briefing pick up on all of these themes. Here are three highlights.

The changing nature of pastoralism

Pastoralism is changing. The Moving Up and Out framework in the report helps us think about processes of differentiation. Given population growth, changing resource access, shifts in market demand, change should not be surprising. We really mustn’t get stuck either in a narrative of decline – pastoralism is finished, we must settle everyone and make them agriculturalists (as common in many policy debates) or in one of naïve romanticism, resurrecting a lost ideal.

In a scenarios exercise we did with Ethiopian pastoral leaders and policy leaders a decade ago, we looked at two big drivers – changing resource and market access – as well as a number of shocks (conflict, disease and so on).  Four scenarios emerged, explored in the edited book Pastoralism and Development in Africa: Dynamic Change at the Margins that came out in 2013 (see below). 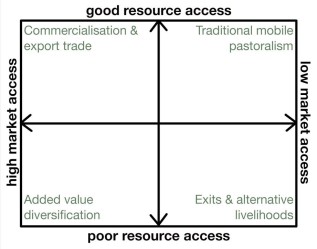 There are therefore multiple pastoralisms today – commercial producers, focusing on export markets; mobile traditional pastoralism supplying subsistence needs and local markets; both requiring mobility but of different sorts. And then those who have moved out of livestock production but are linking to it through alternative livelihoods, and those who are dropping out.

Pastoralism is complex and changing, and policy needs to get to grips with this.

As pastoral economies change, so do the economic activities around pastoralism. There are many livelihood opportunities opening up around new forms of pastoral production – whether in marketing (brokers, traders, intermediaries of different sort), transport (of live animals, milk, meat, fodder, water), production (notably fodder supply), or processing (milk and so on).

But there are also changes in services required, and the growth of small towns in pastoral areas is witness to a changing economy. Driven by investors locally or from outside, including the diaspora through substantial flows of remittances.

There are certainly positive and negative dynamics to diversification. Not all alternative activities generate good livelihoods for sure. But there are opportunities, including for women and young people, often excluded from pastoral production in large herds owned by men. For it’s the small, informal markets in the small towns of pastoral areas, where the biggest development gains – the widest most inclusive linkages and multipliers – can be made.

Development interventions therefore may need to focus less on getting people back into pastoralism. As the report shows through some simple modelling, getting to a minimum herd size through restocking requires sustained support over many years. It’s not just a matter giving someone a goat or two. Instead, governments and donors might focus on basic infrastructure development, as well as business and skill development for ex pastoralists, especially women and young people.

In pastoral areas, inequalities are rising, and processes of differentiation are creating winners and losers. The report has some stark data on differences within areas on herd ownership, health outcomes, nutrition and so on.

Processes of commercialisation, which are benefitting some (mostly large herd owners and traders, many absent but well connected, and virtually all men), but not others. This is being compounded by changes coming from outside. Land and resource grabbing in pastoral areas is growing, often with external investors in cahoots with local elites.

New irrigation schemes are being established in dry season grazing; new solar and wind energy investments are being set up in rangelands; and private conservation areas are being expanded, excluding pastoralists from grazing areas and migration routes.

All this is having a huge impact on social relations at the centre of production: individualisation, privatisation, enclosure are shifting the way rangelands are managed. Flexible movement across common pastures is increasingly constrained, increasing uncertainty, and accelerating exclusion.

These three themes, while focused on the Horn of Africa, are at the centre of the PASTRES research project. While the report offers some stark warnings and some depressing data, I think we have to be optimistic about the future of pastoralism – in its many new forms. Mobile livestock production, making use of new ways of dealing with and living from diverse sources of uncertainty, is perhaps the only system that can generate resilience in such harsh environments.