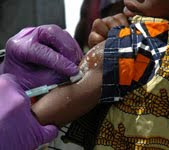 We are on the Kenyan coast, not far from Kilifi town and the site of the Kenya Medical Research Institute (KEMRI), at a conference which the STEPS Centre has had a role in convening, together with colleagues at the London School of Hygiene and Tropical Medicine (LSHTM), KEMRI and the University of Nairobi. Around fifty participants have gathered from all corners of the African continent, as well as Europe and the US, to debate what ‘publicness’ and ‘the public’ means in the contemporary worlds of health-seeking, health policy and intervention, and health research in and in African settings. Photo: Sean Warren / iStockphoto

Some of us are anthropologists, some are historians, and some scholars of science and technology studies or bioethics; many of us are also practitioners, involved in day-to-day health research and the many engagements it entails. As one might imagine, our discussions are rich and diverse.

As Wenzel Geissler of LSHTM suggested in his opening presentation, it seems that ‘something has changed’ from the period just before and after independence in many African settings, when public health and science were perhaps more clearly and firmly associated with nation states and the publics they were supposed to serve.

While chronologies and baselines can always be contested, and many participants have revealed disruptions and variations around this picture in the colonial period as well as before and since, the imaginary of interlocked state-public-health-publics serves as a useful marker against which to think about diversity and change.

And as papers have now made abundantly clear, these departures have been stark indeed. We have seen the rise of neoliberal, marketised and privatised forms of health provision, constructing publics in far more individualised ways – often as consumers. We have seen the rise of global health architectures and financing, often with dubious forms of accountability linked to new eras of philanthropic and philanthrocapitalist funding. And we have seen the rise (and fall) of focused research and policy on particular diseases, with ‘vertical’ architectures, funding flows and notions of ‘predicament publics’ emerging accordingly.

In my opening paper, I attempted to outline what appear as some of the dominant policy narratives which now flourish in the field of public health. Notions of ‘primary care publics’, ‘predicament publics’, ‘experimental publics’ and ‘pandemic publics’, I suggested, now co-exist, each associated with different visions of what kinds of health priorities matter and to whom, and with different sets of political interests, resource flows and governance aims.

Each also implicates a politics of scale and of knowledge in defining who and where the relevant public are, and how they should be involved or ‘summoned’. As I hoped and expected, contributions and discussions over the last few days have disaggregated, multiplied and illustrated diverse strands within each of these broad narratives. Thus we have heard about emerging ‘HIV publics’ from sites as diverse as western Kenya and South Africa. We have heard about emerging publics associated with chronic diseases, a dramatically rising and major cause of mortality in many African settings, whether amongst those facing obesity and diabetes in Uganda as richly documented by Susan Reynolds-Whyte, or in relation to cancer in Botswana, as Julie Livingstone’s powerful paper documents.

In the context of chronic disease predicaments, just as in some recent strands of debate around HIV in an ART-available world, publics are often imaged and summoned as individuals, with rights and responsibilities to manage their lifestyles, nutriotion and behaviour in particular ways.

Narratives that blame the individual also serve neatly to detract attention from alternative narratives – about obseogenic (conditions that lead people to become excessively fat) or carcinogenic environments – which would associate the problems with, inter alia, junk and cooking oil prevalence, toxic waste dumping, and the powerful political-economic and corporate interests that lie behind these.

Complicating and illustrating the figure of a global ‘pandemic public’ anxious about avian and ‘swine’ flu, haemorrhagic fevers, and other so-called emerging infections which arise in one setting and threaten to sweep the world, Clapperton Mavhunga encouraged us to pay closer attention to mobility – of animals as well as people and microbes – as key features of our times.

Yet as discussion has explored, the mobility of some coexists with the groundedness of others. It is often quite located, deeply historicised production systems and economically-organised production and market chains that provide the incubators for zoonotic disease, for instance. Guillaume Lachenal’s fascinating paper on Cameroon also reminds us that the elaborate, high-publicity scientific and media attention to ‘virus-hunting’, which has been so pronounced in the search for (and finding of) new HIV and SIV viruses there, may be enacted in local and national settings in ‘plays’ and performances by politicians and musicians that parody international representations and concerns.

On the ground, Lachenal suggests, new HIV viruses, like avian flu, are not major health concerns – and thus they are the subject of non-interventions. Yet elaborate, nihilistic performances also serve to take attention and resources away from other public health concerns and their publics – such as those around primary care.

Situiations where medical research stations are ’emplaced’ in primary care settings, as evocatively explored by Alice Street in Papua New Guinea, also illustrate such tricky interplays. meanwhile, other contributions – whether from Northern Nigeria by Murray Last, or across eastern and southern Africa by Steven Feierman – have offered us insights into the complicated local social networks and sets of helaing precepts and practices that sit alongside, and sometines engage with, policy-led systems and approaches.

These, and other, contributions have thus been exploring what one could see as an interplay of narratives and pathways of public health – and the often highly unequal material consequences that follow. As Michael Parker has suggested, the networked combinations of people, resources, institutions, activities and technologies that one could see as pushing and ‘glued together’ by particular narratives (in his case, around genomic approaches to malaria control), might be better seen as ‘contraptions’ – drawing attention to their unwieldy, often rickety nature.

In this vein, attention is also drawn to the many inequalities, tensions and frictions which take place within contraptions. Many fascinating and revealing papers have explored these, especially in relation to the interactions between participants, fieldworkers and scientists that take place in the collectivities that constitute ‘trial publics’. Inequalities are at stake, and creativity, and a politics of publicity and secrecy, shapes what is and is not revealed. Yet participants and fieldworkers are also active in articulating alternative narratives about what matters for health and wellbeing.

There is more to come, and this is only a taste of the discussions so far. By focusing in on what ‘publics’ are coming to mean, and on how they are being represented, I hope that over the next two days we can begin to home in on some of the alternative narratives that are emerging – those that emerge from people’s own variegated health concerns in a highly unequal context, and which might provide pointers for pathways to meet them.