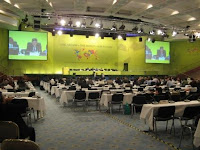 I am in Bonn this week for meetings around the Cartagena Protocol on Biosafety, the United Nations’ agreement to regulate the trans-boundary movement of living (genetically) modified organisms. From sensitive political discussions over liability and redress to questions over how to incorporate socio-economic considerations into decision-making, the working procedures of the protocol are still very much “under construction” 8 years after its text was first agreed.

The fourth Conference of the Parties, serving as the Meeting of the Parties (COP-MOP 4) to the Cartagena Protocol on Biosafety is running until 16th May. On Tuesday 14th I took part in a side event at the Conference at the invitation of Dr Sachin Chaturvedi of RIS (Research and Information Systems for Developing Countries, based in New Delhi) looking specifically at Article 26 of the protocol. Initially introduced following efforts from the Africa group, the first part of this article allows countries to take into account socio-economic considerations in their decisions over allowing imports of living modified organisms. Although there are a growing number of (primarily economic) analyses demonstrating the benefits and costs to farmers of various transgenic crops, several countries are unclear about how best to employ them in decision-making, and there is no official mechanism for the sharing of such information (as mandated in Article 26.2).

Dr Chaturvedi introduced an RIS report that outlined the Indian experience in this regard and highlighted the need for developing countries to take the initiative in proposing systems for research and information exchange. This presentation was put into an international context by my own talk, in which I gave an overview of US, EU and Chinese regulatory frameworks, and a presentation by Moustapha Kamal of ICTSD, who introduced work that his colleagues had conducted on key trade and sustainability issues around biotechnology. International trade issues were also noted by the session chair, John Komen of the Programme for Biosafety Systems at IFPRI, who highlighted the need for countries to take into account other international obligations (e.g. under the WTO) but stressed that, with only one relevant dispute to draw upon in terms of case law, the situation here was still evolving.

Meanwhile, delegates have been involved in discussions around Article 27, attempting to define “rules and procedures in the field of liability and redress for damage resulting from transboundary movements of living modified organisms”. The process, initially scheduled to last for four years, still seems far from resolution. When I left the discussions in the Liszt Room yesterday, parties were split over a proposal for a legally binding instrument that had been put forward by the large negotiating block known as the “like-minded group”. This conflict potentially jeopardises one of the most potent components of the protocol, and has become one of those most discussed in the corridors.