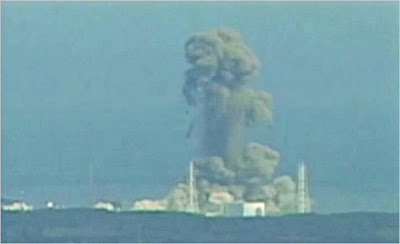 Photo: Screen capture from video of an explosion at the Fukushima Daichi plant in Japan (Reuters)

What lessons can be learned from the tragic calamity in Japan, for global debates about nuclear power? With the situation still unfolding, it is too early and uncertain to conclude with any confidence. Indeed, it is somewhat distastefully self-absorbed even to begin to adopt such a narrow sectoral focus, at a time of such continuing and unresolved suffering for so many people. Yet it is questions over the general fate of nuclear power that seem to be commanding premature and parochial attention in much international news media and political debate. With defensive reflexes already in danger of ‘locking in’, the issues are worth considering quite carefully even at this early stage.

One thing is for sure: there are no resounding new revelations over the vulnerability of nuclear power to unforeseen levels of severity in specific natural disasters like earthquakes and tsunamis. This we knew already. It is to the credit of Japanese nuclear engineering, that Japan routinely adopted a series of additional safeguards of a kind that are typically excluded in nuclear construction elsewhere. In this respect, the lesson is very general: no matter how stringent the precaution, there is always the possibility of surprise. This applies not only in Japan, but also in less earthquake-prone regions, especially where assumptions about the likely magnitudes of storm surges or sea level rise are relatively relaxed. It is not just Japan that has learned lessons about the prospect of events occurring beyond the levels anticipated in official risk assessments. It has long been clear that risk assessment everywhere, systematically excludes many kinds of possible eventuality. There are many other scenarios that can be imagined apart from unusually severe earthquakes, that can lead to the catastrophic combinations of abrupt loss of connection to the grid, coupled with damage to vulnerable auxiliary power supplies (which are often located outside protective structures). It is implicit, for instance, in all four of the UK Government’s ‘top tier’ security threats, that some such scenarios may even be thought more likely in the UK than Japan.

Nor, then, is there any surprising new lesson about nuclear power’s general vulnerability to other kinds of catastrophic accident. This also has long been well known – and well exemplified. It seems recently to have become unfashionable to mention in ‘polite’ policy debates, the relevance of the successive nuclear shocks at Three Mile Island in 1979 and Chernobyl in 1986. Yet features of these events were routinely and assertively declared “impossible” (or of “negligible likelihood”) in ostensibly-rational tones before these accidents actually occurred. After the fact, various kinds of received wisdoms emerged concerning the supposedly “unique circumstances” in each case. But it is worth noting that these claims are all instances of ‘wisdom in hindsight’. The Chernobyl RBMK reactor, for instance, was (before the 1986 accident) even the subject of praise over its potential safety features. And the now often-cited supposedly distinctive safety shortcomings of the RBMK are not as unique as frequently claimed. In fact, neither the notorious ‘positive void coefficient’ (which accelerates, rather than slows down, nuclear reactions after shutdown), nor the lack of secondary containment – two things that were implicated in that disaster – are exclusive to that reactor design. And whatever their mistakes, the Soviet operators twenty five years ago held no monopoly on the capacity for human error. No doubt we can in due course expect similar post hoc exaggerations of supposedly unique Japanese circumstances. Either way, it seems to be assumed that present-day assurances by the nuclear industry on the completeness of risk assessment carry greater weight than the demonstrably self-interested bias and errors of the past. Our vulnerability to such assumptions has long been obvious.

Beyond these familiar issues, there is one striking general lesson that is already arising in current events: the pressures on the media to adopt a narrative of reassurance. With a grim responsibility for preventing the consequences of panic in an already traumatised population, it might at least be understood (if not condoned) that the Japanese Government be circumspect in its readiness to acknowledge the full gravity of the possibilities now faced. But there is no such excuse for media commentators on other continents, many of whom seem explicitly to see their principal responsibility to lie in ‘reassuring’ what is clearly feared to be an inconveniently-sceptical public. Respected institutions that should know better, are allowing their names to be used by individuals who (presented as objective ‘nuclear experts’), are sometimes acting as little more than PR platforms for the partisan interests of a newly-beleaguered nuclear industry.

Uncertainties notwithstanding, this ‘expert’ attention repeatedly takes the form of biased and incomplete understatements of the severity of the present situation and of future possibilities. Manifest hazards such as highly radioactive plumes are qualified as only “potentially” dangerous (as if danger is not always ‘potential’). The seriousness of structural damage by hydrogen explosions is understated as if only a minor encumbrance. Obvious exacerbating factors, like the vulnerable positions of irradiated fuel ponds, remain systematically neglected until realised. Expediently contrived forms of words are concocted disingenuously to confound outcomes like ‘containment failure’, ‘pressure vessel breach’, ‘nuclear explosion’, ‘fuel melt’ and ‘meltdown’. A “main message” is continually referred to – and repeatedly refuted by successive further escalations in unfolding events – that the emergency is likely to be imminently resolved. Contrasting safety features of current reactor designs elsewhere are misleadingly exaggerated. The effect is consistently to imply – and even explicitly assert – that eminently possible severities of consequences, are somehow “impossible”.

The overall effect of much of this ‘expert’ media commentary is one of sustained suppression of plausible (and highly relevant) worst case possibilities – as if blinkered denial is somehow synonymous with well-informed responsible rationality. Perhaps even more incongruously, opportunities are sometimes taken (without prompting or substantiation), gratuitously to denigrate alternative energy technologies. Reference is made to significant Chinese nuclear construction rates, without mentioning the even larger investments of that country in, say, wind energy. It is difficult to imagine a more corrosively partisan position than the monotonously-implied counsel of despair: that there somehow exists “no alternative” to nuclear power.

So the most serious lesson already emerging outside Japan is about the pressures, driven by established nuclear commitments, to obscure information; compromise objectivity; and suppress political choice about energy futures. We may live in hope that there will come a time when more comprehensive and dispassionate attention will be given to the full global potential of viable alternatives to nuclear power. Many of these are manifestly more resilient in the face of technical mishap, natural disaster or deliberate acts of violence. Distributed renewable energy infrastructures, for instance, offer a way to avoid huge regulation-enforced losses of electricity-generating capacity when a series of similar plants have to be closed due to safety failings in any one. They minimise the compounding economic impacts of the knock-on self-destruction of massively expensive capital equipment, some time after an initial shock. They do not threaten to exacerbate natural disaster with forced precautionary evacuations of large tracts of urban industrial areas. And there is no scenario at all – unlikely or otherwise – under which they can render significant areas of land effectively uninhabitable for decades, let alone commit large populations to the potential long-term (and untraceable) harm of elevated low doses of ionising radiation. Although apparently more muted in much politics and the media, it is already the case that global industrial momentum behind renewable energy development significantly exceeds that in support of nuclear. The worldwide potential presented by these technologies is far larger than that envisaged in current nuclear programmes. With political will, the possible timescales are more favourable. And the commercial, industrial, employment and economic benefits that these renewable technologies offer is at least the equal of anything promised by nuclear.

These are the lessons that we may hope to learn in time – and set alongside other relevant considerations. But now is the moment for solidarity and support in the face of the terrible conjunction of natural catastrophe and a threatened – but uncertain – nuclear disaster currently unfolding in Japan. In the end, the most important long term cause for hope on energy is the same elsewhere in the world as it is in Japan. If we are allowed to exercise it, we certainly have the choice.