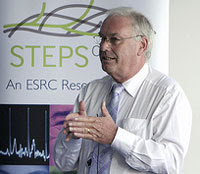 The penultimate session of the STEPS Centre symposium – Democratising innovation: towards more accountable institutions – threatened to be a rather tired affair: afternoon slots are always at risk of hypnotising participants in their post-lunch drowsiness. Photo: Des Turner MP by Lance Bellers

However, enthusiastic responses by the panel of Des Turner MP, Richard Jolly and Brian Wynne to an energetic ‘provocation’ by Andy Stirling made for a lively debate culminating in some thoughtful recommendations.

The discussion began with Manifesto’s recommendations for institutional reform as a way of addressing the vector properties of innovation paths (the which way and who says and why) – or as Andy Stirling put it “performing institutional judo at a constitutional level”.

The debate that followed centred on the question of whether the Manifesto should seek to propose more radical changes to the existing power structure or new actions within the existing structure. I was immediately transported to an episode of the BBC comedy Blackadder Goes Forth in which the proletariat Private Baldrick offers to marry into aristocracy to save his colleague. When asked what has happened to his revolutionary principles, he replies “I’m working to bring down the system from within”.

The arguments for and against working within existing power structures crop up time and time again in a variety of different debates. Consistently running through my mind was the limited – at this early stage – ‘Southern’ or ‘developing country’ input into the design of the Manifesto – a manifesto intended to benefit those parts of the world. I appreciated Brian Wynne’s suggestion that by focusing on Western institutions space can be created within which poorer countries can have more freedom to determine the direction, distribution and diversity of their responses to the problems they face.

But that merely opens up another set of concerns. Will they use that space, and if so how? At what point, if at all, do we have the right to get involved if the space is not used in a way we think it should be? These are tricky questions, but this is not a simple issue.

Perhaps the drafters of the Manifesto should look to their own advice on how to proceed. When faced with the food for thought generated by the symposium it might be pertinent to ask which bits to eat, who says so and why?