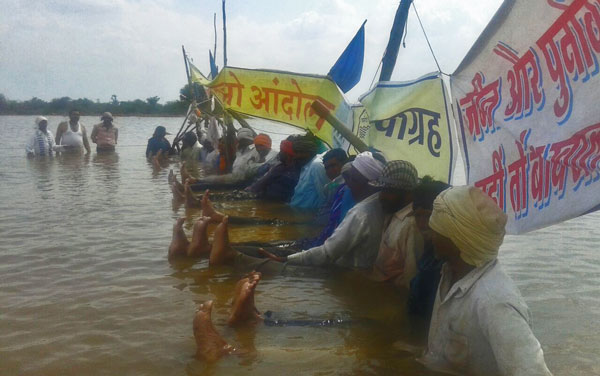 In the Narmada valley in western India, displaced people and activists are protesting against displacement, submergence and the violation of their basic rights. 20 activists, including Alok Agarwal, senior activist of the Narmada Bachao Andolan (Save the Narmada Movement), have been standing or sitting waist-deep in the submergence waters of the Omkareshwar dam in Madhya Pradesh, India, for the past 12 days. According to a press release by the movement, their skins and bodies are being badly affected and are disintegrating, but the protest goes on.

The activists are protesting because the state government seeks to increase the water level of the Omkareshwar dam from 189 metres to 191 metres. The dam is one of the 30 large dams under construction on the River Narmada – making up one of the most controversial river valley projects in the world. It is set to displace at least a million people from their homes, lands and livelihoods, many of whom are Adivasi (indigenous) communities as well as lower caste marginal and small farmers.

The Omkareshwar dam will displace 50,000 small farmers and flood about 5,800 hectares of India’s last intact natural forests. When work on the project started, no proper social or environmental impact assessments had been conducted.

The problem with compensation

A 2011 Supreme Court judgement ruled that each displaced family should be entitled to a minimum of 2 hectares of land or receive a grant to purchase land. But many oustees in the past were lured into accepting cash compensation from the authorities. Based on my past research in different parts of the Narmada Valley, I know that cash compensation can be squandered off very quickly and cannot sustain a household over time.

Many oustees have returned that compensation, sometimes through taking out high-interest loans.

Neither the state government nor the Narmada Hydroelectric Development Corporation Ltd have provided the oustees with their basic entitlements. Instead, they are being confronted by submergence and forced displacement.

A history of protest

Protest in the Narmada valley is not new. In September 2012, protesters in the Omkareshwar area braved the dirty submergence waters for 17 days, after which the Chief Minister agreed to reduce the water level.

For over twenty years, the movement has adopted a strategy of non-cooperation, mass mobilisation and non-violent forms of protest including rallies, picketing, sit-ins, fasts and the more extreme case of “save or drown actions”. Activist villagers have refused to vacate their ancestral homes. As a result they have resisted and faced police atrocities and repressive tactics including mass arrests, harassment, sexual assault, bulldozing of their homes as well as the clear-felling of their forests.

The Narmada and other anti-displacement movements across India have for decades highlighted the dark side of infrastructure projects which have often led to an unequal spread of pains and gains. This is particularly true through processes of forced displacement that have been inimical to the livelihoods of poor and marginalised people in rural areas.

The politics of land acquisition

In post-independence India, displaced people have always been at the bottom of the pile and have rarely had their rights taken seriously. Their situation is particularly weak under the current BJP-led government of Narendra Modi.

The 2013 Act had been passed unanimously after a consultation period of seven years by the previous Congress-led government, and included the support of the BJP. Though not perfect, it was an improvement over the colonial 1894 Act that it replaced.

Now, the new Bill, which was passed via the controversial Ordinance route, creates a special category of projects to be fast-tracked. These include industrial corridors, defence, affordable housing and infrastructure projects including Public Private Partnerships (PPPs), and other ‘special categories’. These categories are exempt from the safeguards of the 2013 Act, which require the consent of 70-80% of the land owners.

Social impact assessments and other requirements have also been diluted. This model replicates the so-called ‘Gujarat model’, where 13 Special Industrial Zones, industrial corridors, and a strong nexus between corporate houses and the state have been promoted.

Opposition parties and social movements have been united in condemning the amendments and the Bill, which violates many international human rights laws and principles. These include the right to free, informed and prior consent for indigenous peoples; and the integrity of land as a key determinant of a secure livelihood and as a basic right of marginalised groups such as smallholders, pastoralists, agricultural workers and forest dwellers. Much of the land acquired remains unused, but the provision of returning unused land has also been diluted.

50- 70 million people have been displaced by ‘development’ in India since 1947 and most of them have not been resettled properly, let alone rehabilitated with dignity. The ‘land for land’ principle, which is key to ensure that displaced people do not slide into impoverishment and marginalisation after displacement, has often not been honoured.

More worrying is the condition of share-croppers, agricultural workers and those who lack formal titles to their land, who rarely get compensation. Their situation has not been addressed, and is only likely to worsen because the Bill will pave the way for a new wave of land and water grabs, and the further dispossession of powerless and marginalised groups from their resource base.

On Wednesday, a 40-year-old farmer from Rajasthan committed suicide during a rally organised by the Aam Aadmi Party in Delhi to protest against the central government’s land acquisition ordinance. Despite the widespread protest across India, the amendment was passed. Little wonder then that the current government is increasingly being accused of being anti-poor and undemocratic.