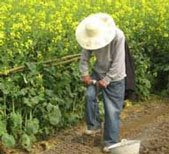 In rural transitional China many households include absentees who live and work in urban centres and send money back to their families in the village. These individuals are extremely important in accounting for incomes and expenditures, and form a central part of family strategies to move out of poverty.

The breakdown of many traditional categories in China’s dynamic socio-economic context became apparent during a visit to two rural villages in Hubei province last year as part of the STEPS Centre Rethinking Regulation project.

Studying rural worlds at the household level makes sense in many parts of the world, and has been central to much development research over the past two decades. In Hubei we met with Prof Shijun Ding of Zhonghan University of Economics and Law. He was leading a team conducting household surveys as part of the POVILL research consortia’s important research into household complexities in China and ways of taking methodologies forward.

Prof Ding’s team collected information from 12,000 households across four counties in Hubei and Sichuan provinces in order to investigate strategies and behaviours used by the rural poor to cope with health shocks caused by major illness.

During this work Prof Ding found many of the major breadwinners within households are absent, away in cities earning money which they then send back to their parents, who act as the guardians of their children. This phenomenon was demonstrated by the 2006 national agricultural census, which reported 30% of agricultural labourers (those above the age of 16 with the ability to work) in Hubei are working far away from their homes. Between the ages of 20 and 24, this percentage doubled.

To think these questions would obviously lead to practical research difficulties. Does one include the outgoings in the village alone, or also the expenditure in the urban areas? How does one disaggregate the income of the couple that goes towards supporting their children from that which is spent on their parents?

More than a year later, Dr Chen Chuanbo of Renmin University of China – a STEPS Centre research partner along with Prof Ding – continues to think of ways to address this challenge. Next year, for another project, Dr Chen and his colleagues plan to time their rural research visits to coincide with the Spring festival, when migrant workers traditionally return home. Hopefully this will allow them to gather more complete data on both resident and absentee household members and shed more accurate light on the complexity of China’s rural situation.