Ten years after the African Technology Policy Studies network was incorporated, nearly 200 delegates from 29 African countries are gathering in Egypt to discuss ‘The State of Science, Technology and Innovation in Africa: Implications for Achieving the Millennium Development Goals’.

There was a buzz as delegates gathered for the first morning of the conference, many of them greeting friends who they had not seen since last year’s meeting in Abuja. The introductory session included welcomes from ATPS and other delegates representing key stakeholders and drivers of science, technology and innovation in Africa – youth, women and journalists – as well as international partners. Dr Kevin Urama, Executive Secretary of ATPS, provided an introduction to the workshop (which he reminded us was NOT a “talkshop”), stressing that delegates were expected to go away from the conference with a fuller understanding of their potential contribution to Science, Technology & Innovation (STI) for Africa’s development. 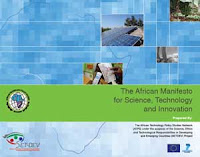 The cover of the “African Manifesto”

Dr Urama highlighted the African Manifesto, which will be presented to the meeting tomorrow (he’d spoken about it at the launch of the STEPS Centre Manifesto in June). The African Manifesto was produced under the European SET-DEV project, alongside its ‘sister manifesto’ in India, Knowledge Swaraj. I’ll blog more on the African Manifesto tomorrow, but today we learned that it “makes a case for Africa’s sovereignty in science, technology and innovation”, arguing “for full socialization and democratic governance of STI in Africa, for Africans, by Africans as a pre-requisite for sustainable development in Africa”.

Later presentations in the morning focussed on the challenges of STI governance, R&D investment, youth in STI, the risk of brain drain and making the most of the African diaspora.

The afternoon was dedicated to lessons provided from other regions – the Caribbean, Europe and India. The audience was clearly interested in the experiences of these regions, but the question remained: how transferable were they to the African continent? Whilst recognising the benefits of learning from international colleagues, the African Manifesto and the discussions today made it clear that Africa would have to conduct its own experiments, reap its own rewards, and learn its own lessons. The ATPS conference will clearly provide a forum for this learning and an inspiring gathering for those interested in science, technology and innovation in Africa.