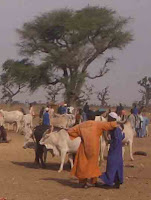 This session featured some of the leading architects of the sustainability science field – Bill Clark, Bob Kates, Pam Matson, Hans Joachim Schellnhuber, Billie Lee Turner II, as well as Edward Miles and Elinor Ostrom. Even John Holdren, President of the AAAS, took part in the symposium. It was one of the reasons I decided to make the trip across the Atlantic (and draw down on my carbon credits). And the session didn’t disappoint.

I wasn’t the only one enthused by this event. For some reason, the conference organisers didn’t anticipate the large crowd it would draw. It was beyond standing room only, with some participants being forced to stand outside the actual meeting room and peer forlornly over the heads of those fortunate enough to find a place inside. Fortunately, I anticipated the crush and managed to claim a seat near the front of the room.

We were treated to a series of provocative presentations which set out the dimensions of problem-focused and place-specific studies of human-environment interactions at different scales. Pamela Matson from Stanford University kicked of the proceedings with a presentation on the current scope and focus of Sustainability Science. She argued that Sustainability Science sought to support a ‘transition to sustainability’ by addressing two fundamental challenges: meeting the needs of people today and in future and sustaining the life support systems of the planet (i.e. ecosystem functions and services). Borrowing from Donald Stokes’ “Pasteur’s Quadrant” idea, Pamela observed that to make this transition will require more “use inspired fundamental research” driven by societal need but performed under the conditions of imagination, flexibility and competition that we associate with traditional basic science. She pointed out the field raised questions about driving forces (transition processes; production-consumption interactions), impacts and consequences (limits; vulnerability and resilience) and guidance (incentives for innovation; institutions for governing human-environment systems; valuing outcomes; and designing effective knowledge action systems).

Robert Kates, an independent scholar and former professor of mine from Clark University, talked on “Reducing Poverty and Hunger in Africa”, a topic he has been pursuing for many years. He described what he called “African Exceptionalism” – the unique challenges Africa faces in terms of its geography, governance, endemic poverty and geopolitics (including colonialism, aid and the impact of globalisation). Bob pointed out that Africa’s problems were manifold and require a plethora of solutions that addressed these at different places and scales. Using agricultural production as an example, he stated that there were many factors that required attention, but, drawing on Von Liebig’s Law of the Minimum (which states that growth is controlled not by the total of resources available, but by the scarcest resource), he observed that one needed to focus attention on the most limiting factor. Thus, for example, in semi-arid areas water might be the limiting factor. If water supply is sufficient, the focus might turn to nutrients. This led him to a discussion of why fertilisers are not being used sufficiently in many parts of Africa, noting that it may be for a variety of reasons: it doesn’t work well or it doesn’t pay enough (costs too much) for farmers; or it’s simply not available due to a range of policy or market failures. Observing the success of the Gates Foundation’s “Grand Challenges to Global Health Initiative” to mobilise resources and concentrate minds on key areas of research and development in the health sector, Bob suggested a similar approach to addressing “Grand Challenges to Sustainability Science”, including: addressing key obstacles to sustainable development; searching for “mid-range solutions”; and promoting transformational, not incremental change. Referring back to his fertiliser example, he outlined a fictitious request for proposals that Gates Foundation (or some other donor) might wish to produce for improving fertiliser use in Africa. This would call for R&D efforts to make nutrients work better in African soils, make nutrients pay for African farmers (possibly by developing low-cost “generic fertilisers” just has we have been developing “generic pharmaceuticals”) and make nutrients available in different forms.

The other presentations by John Schellnhuber from the Potsdam Institute for Climate Impact Research, Edward Miles of the University of Washington, Billie Lee Turner II of Clark University and Elinor Ostrom from Indiana University were equally stimulating. These sessions raised a series of questions on how the dynamic interactions between nature and society can be better incorporated into emerging models and conceptualisations that integrate the Earth system, human development and sustainability. Among other things they asked, how are long-term trends in environment and development reshaping nature-society interactions in ways relevant to sustainability? What determines the vulnerability or resilience of the nature-society system in particular kinds of places and for particular types of ecosystems and human livelihoods? Can scientifically meaningful ‘limits’ or ‘boundaries’ be defined that would provide effective warning of conditions beyond which the nature-society systems incur a significantly increased risk of serious degradation? What systems of incentive structures can most effectively improve social capacity to guide interactions between nature and society toward more sustainable trajectories? How can today’s relatively independent activities of research planning, observation, assessment, and decision support be better integrated into systems for adaptive management and societal learning?

Unfortunately for those of us present at the session and those of you reading this blog, the AAAS does not automatically make the presentations available (either posting them online or as hardcopy handouts), so I cannot direct you to the source materials just yet. I can, however, suggest you visit a related workshop on the same theme that was held in Venice, Italy, in October 2006. That event was kind of a dry run of the AAAS event and included some of the same participants. Background papers used in that workshop can be found at: http://www.cid.harvard.edu/sustsci/workshops/06sanservolo/index.html

John Holdren, the AAAS President, finished off the session with a presentation on “Sustainability Science: The Way Forward”. He argued that the most important ingredient missing at present is an integrated understanding of what he called an “an agreed map”. What does exist is an understanding and appreciation of the need for research that is interdisciplinary, intersectoral and integrative (across disciplines and scales) to help us think systematically about parts of the terrain that still need to be settled and those we have some confidence in. He noted that there are now numerous initiatives underway to link key institutions and efforts to create a more complete and up-to-date “map”, including:
· The Forum on Science and Innovation for Sustainable Development (mentioned earlier)
· A new Sustainability Science section in the Proceedings of the National Academy of Sciences
· A new initiative of the US National Science Foundation on Human-Environment Systems
· An upcoming symposium of the International Union of Biological Sciences on “Biological Sciences for the 21st Century: Meeting the Challenges of Sustainable Development in an Era of Global Change”
· AAAS Roundtable on Sustainability Science Programs (discussed below)

In closing, Holdren posed a set of questions to the audience, including:
· How to make participation a key element of these processes? (in response, he mentioned again the idea of scientists committing to tithe 10% of their time to working directly with the people we want to help; joining committees that matter; etc.)
· How to bring about the genuine “co-production” of knowledge with both local people and decision-makers (in order to learn from them and inform and influence policy and practice)?
· How to develop a common language to help communicate the complexity and dynamic nature of sustainability science while ensuring we can identify practical and effective approaches and applications (for this, he said, we should learn from other applied sciences)?